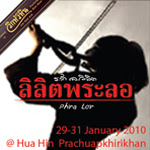 Children’s Day is coming up on Saturday, January 9, 2010–not that the other 364 days wouldn’t be considered pretty much the same, but on Children’s Day there are special activities.

Local schools and the city government usually have a small fair at 19 Rai where local school’s have displays and games to play. There is free ice cream, cakes, balloons and other treats for the kids.

Problem is, some years they hold this in the early morning, and other years, just after lunch. Your child’s school probably has better information than this old Dad.

In addition, there will be activities at the Hua Hin Market Village and many government offices, especially military camps have shows for the children. With as many forts, bases and camps as we have in this area, there’s bound to be something going on.

If anyone knows of any specific activities being held for Children’s Day in Hua Hin, please leave a comment here and FBF will update the post.

Also, Teacher’s Day is the week after so keep your eyes out for a pretty apple…